The Mombonga household in Rural Africa consists of an adult man, two adult women, two young girls aged 12 and 13 and a young boy aged 13. In terms of assets they have 50 units of currency and two parcels of land. A modest household with many mouths to feed, the Mombongas await the beginning of the new plantation season. This essentially is the beginning of another year for them. The Mombongas have a few options at hand. They could invest the money in crops and horticulture to feed their family or invest partly in commercial crops like cotton to earn some extra cash. They could also invest some money in long term planning by sending their children to school. However, with limited resources at hand, some tough choices are to be made.

Cut to reality. We are the heads of the Mombonga household. We are the decision maker. The description that we gave you is of our family which is a part of a computer game called the 'African Farmer Game'. We are supposed to put our feet in the Mombongas' shoes and run their lives. Surely being educated, urban elite who are doing PhDs in the area of development, we had a better idea of the factors that would improve the Mombongas' lives. It is assumed that we could make better decisions and steer the household towards development. Does this notion sound familiar? Yes, this happens world over. Educated elites sitting in offices make decisions about policies to transform lives of the Mombongas. This based on the idea that these elites (like me) understand what must be prioritised to change the lives of households like the Mombongas. But whose priorities are these? Are these the 'Mombongas' priorities' or are these 'our perceptions of their priorities'? Let’s see.

The game started at the beginning of the first cropping season.We made a quick decision to plant cotton in one of my fields so we could sell it in the market and earn some extra cash. This meant investing money in expensive cotton seeds. We planted maize in another field to feed our family. However, we soon realised that the produce from only one field would not be enough to feed our family. Also, we needed to provide them nutrition for which planting horticultural crops was necessary.  We decided to leave the expensive cotton in our barn and planted maize and horticultural crops. So, a part of our liquid assets (cash) had now got ‘locked’ in the stored cotton seeds. Due to one seemingly 'smart' decision, we now had lesser options than what we started with. The next decision we made was to invest in education. Education is a big enabler and could potentially transform the future generations of the Mombongas. However, the household had only enough cash to send one child (out of three) to school. Obviously being development minded modern people we decided to send a girl child to the school (probably an evidence of reverse gender bias too). With 3 adults and 3 children in our household, we could also send one of the adults to work in a neighbour’s field against a share of their produce. We were very happy with the decisions we made within our limited capabilities (except purchasing cotton seeds). We had invested in assuring a sustainable food supply for our family and extending its capabilities by sending a child to the school. So, our 'superior knowledge' did actually work. However, we soon realised that the household was now left with very little cash and if there was a pest outbreak, we would not be able to invest in any pesticides.

That season rains were below average and a pest outbreak meant our crop yield was down to 80%. This was bad news. Combining our total yield and what we got in exchange of labour, we had only enough to sustain the family. We also needed to save some maize to use as seeds for the next year. However, no extra yield meant we couldn't make any money by selling the crops in the market. At this point we decided to sell the cotton in our barn to get some cash for investment in the next year's crops. We were certainly at a loss because being poor farmers we didn't have enough leverage in the market to get a good price for the cotton. We ended up getting less money than what we had bought the cotton for. So, the family survived somehow this year and had just enough money to buy seeds for next year. By now our haze of 'superior knowledge' was fading away and we were getting uncomfortably close to the reality.

By now the next cropping season was upon us. We had only enough money to buy maize seeds to plant in our fields. Horticultural crops being more expensive, we decided to compromise on that. This also meant that we didn't have money to continue the schooling of our child. This was a tough situation that we were in but there was no alternative. Incidentally this year everyone in the village had enough people to work in their fields so we couldn't get any spare jobs. This was another year with inadequate rains. Our crop yield was again down to 80% and now we didn't even have enough to feed the entire family throughout the year. A dreadful situation was upon us. Destiny had decided that one or more of us would not make it through the year. We ended up losing two children. However, we decided to save the educated child. Our argument was that since we have invested in her education we must give her another chance. If some day we have enough money we could be able to restart her education. Now the household was left with even less money and we could plant only one of the fields. This meant even lesser food for the family. Another horrendous year ended with the household losing an adult this time due to lack of food. Also, the only child we had (the one who was educated for a year) was now sick and we weren't sure if she would make it another year. Mercifully, at this point the game ended. However, this is not how life ends. We shudder to think what could have happened in the subsequent years. The whole family wiped out? The whole village wiped out? 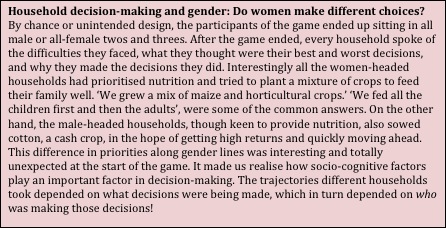 This made us think about our decision to send a child to school. Would the Mombangas have taken this decision if it was not for our 'elite' guidance? It cost a lot of money which meant that in the later years they were left with no capital to buy seeds and grow food, the basic priority for their survival. This makes us wonder about the criticism of several of these communities for not sending their children to school. We must think of the reasons behind such action and try to solve them first. We think now the answer is a little clearer for us. Would you choose to send one of your children to school (possibly only for a few years at best) or keep your family alive? These are tough choices and we can't even imagine making them. But there are families and communities who have to make these choices on a day-to-day basis. It is well and good to talk about raising the capabilities of the people (through instruments like education). But what steps must we take? What actions must we prioritise? We think it is time we thought about these questions. And the thought needs to be followed by accurate implementation.

This post is based on our experiences and ideas, generated while playing the African Farmar Game during our time at the STEPS Centre Summer School.  The game is being developed by the STEPS Centre and would be released soon.
Email Post
Labels: African farmer game development elite IDS knowledge priorities STEPS Centre summer school