Ecologies of Protest: Politics of Nature or Nature of Politics

The great lineup of speakers presented various perspectives with case studies from South Africa, Lebanon, Turkey, Bosnia and Herzegovina and Slovenia. The presentations looked at the aspects of democracy, citizenship, rights and environment. 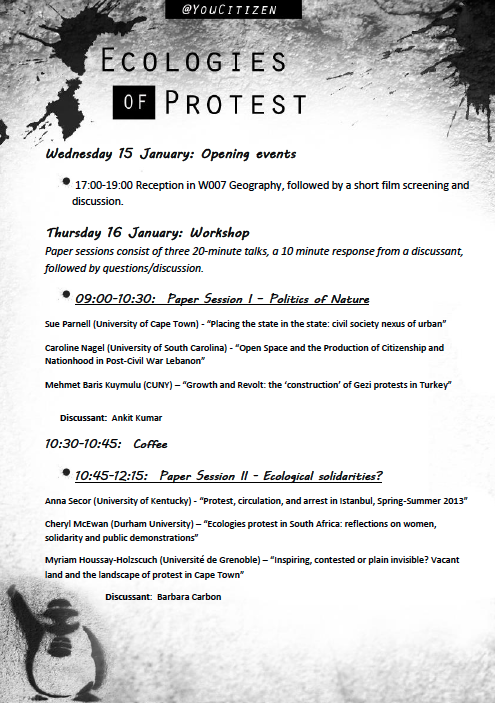 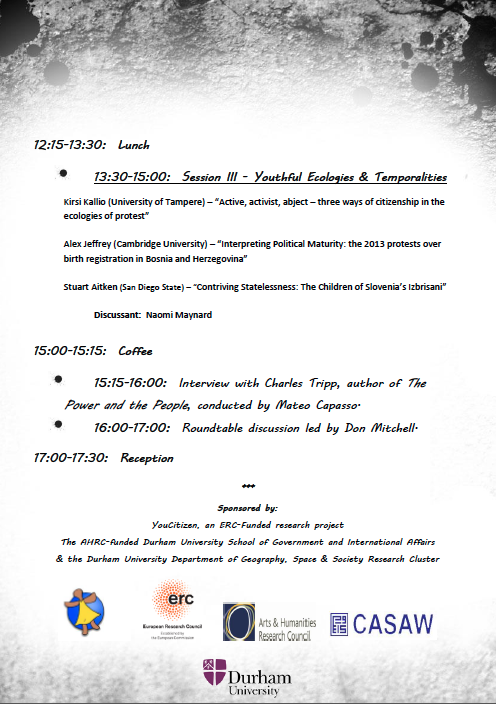 In what I would call a great initiative, three postgraduate students (talk about youth involvement) from the Durham University were invited to act as discussant for the three sessions. I was the discussant for the first session called the Politics of Nature. However, after the first very engaging presentation by Sue Parnell, a more apt title, the Nature of Politics was floated. This was great for me because the discussion that I had prepared based on the reading of the three papers for the session was around the Nature of Protest Politics.

The three papers for this session were by Prof. Susan Parnell from the University of Cape Town, Dr. Caroline Nagel from the University of South Carolina and Mehmet Barsi Kuymulu from the City University of New York. Sue's paper titled “Placing the state in the state: civil society nexus of urban” explored the changing nature of youth politics in urban Cape Town. It discussed how the policies and politics may have now changed and if the youth may have now moved from a politics of apartheid to that of the environment. Caroline presented on “Open Space and the Production of Citizenship and Nationhood in Post-Civil War Lebanon” and discussed how different groups in the rural and urban Lebanon were adopting different politics and tactics to bring people into green spaces and to conserve green spaces. The last paper “Growth and Revolt: the ‘construction’ of Gezi protests in Turkey” by Barsi looked at the recent protests in Turkey that began from the efforts by a small group of youth to save Gezi park, one of the few surviving green spaces of Istanbul. Barsi contested that the protests may not have been part of the larger pattern of middle class protests around the world and argued that neoliberalism was at the heart of this protest.


These three papers were meant to be exploratory and have not been published yet. I can't give a link to the original paper but if one looked at the other works of these scholars one would be able to get a sense of their arguments. What I can share here are my reflections on the papers that I presented during the discussion at the end of the session. So, here it is:

For me there were 3 key overlaps, with the papers sometimes, supporting and the others contradicting each other. These 3 overlaps also, for me seemed to define several of the recent protests. So, in a sense these three overlaps were really about the Nature of Protest Politics.

I really like the word provocation. Provocations are often intended to be disruptive but also to open spaces for deconstruction and reconstruction of our thought processes. So, ultimately then, on these themes I would like to put forward some questions to provoke further debates and discussion.